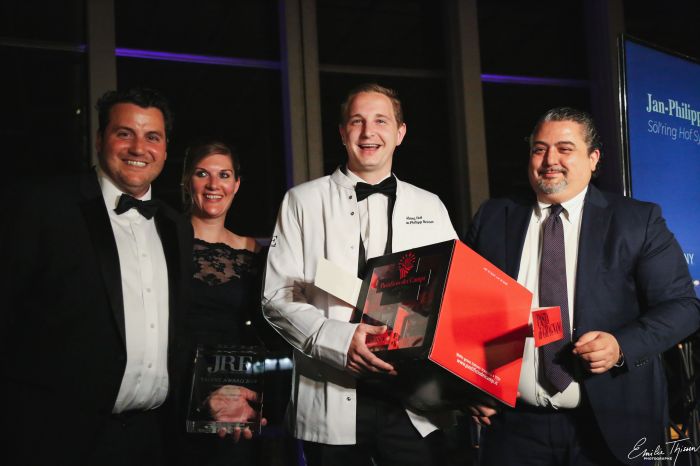 LIÈGE – Jan-Philipp Berner from restaurant Söl'ring Hof has been awarded with the JRE Talent of the Year award 2019. The star Chef received the prize, sponsored by Pastificio dei Campi, for his convincing cooking style and accomplishments as young chef.

JRE-Jeunes Restaurateurs is a leading restaurant association which unites young and ambitious chefs and restaurateurs. Every two years, JRE celebrates those members who have excelled in one of the following six areas: Taste of Origin, Heritage, Entrepreneur, Service, Innovation and Talent. The prices were awarded on Monday evening during the association’s International Congress in Liège.

TALENT OF THE YEAR

Talent of the Year Jan-Philipp Berner is Chef in the gourmet restaurant of Söl'ring Hof on Sylt island, Germany. After years of apprenticeships with renowned star chefs, Jan-Philip Berner came to work at Söl’ring Hof, where he was promoted to Chef in 2013. With his culinary creations he has convinced the gourmet world of his talent.

More than 300 attendees from 16 different European countries joined the XVI International Congress in Liège. European young top chefs from JRE came together to share their never-ending passion for good food. This year Belgium had the honour of hosting and organizing this great international event. In addition to the JRE Award Ceremony, the program of the congress contained a food market, key note speakers such as Ernesto Iaccarino and Friedrich Lehmann and, a gala dinner.